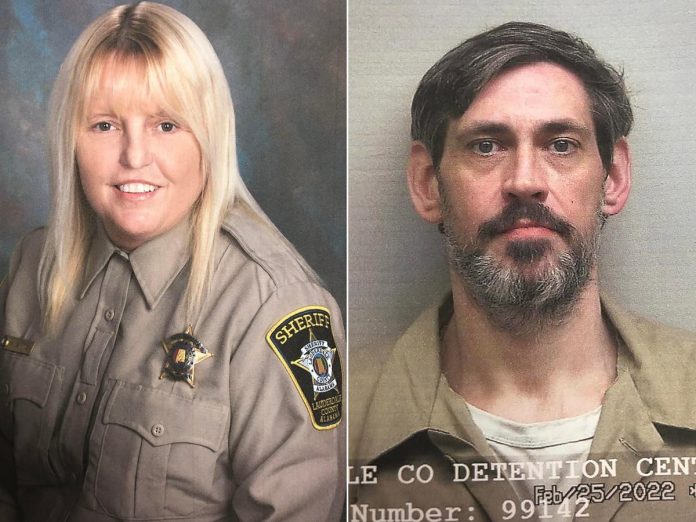 A 10-day nationwide manhunt for Ms White, a 56-year-old corrections officer from Alabama, and White, an inmate serving a 75-year sentence and awaiting trial for murder, ended on Monday evening with a car chase and crash in Evansville. Ms White died from what a coroner ruled to be a self-inflicted gunshot wound, and White was taken into custody.

As he was handcuffed, White allegedly told officers to help his “wife” and insisted he did not shoot her. The pair were said to have been in a romantic relationship for about two years but police say they were not married.

Meanwhile, Ms White’s last words were revealed in a chilling 911 call where she said “let’s get out and run” and blames White for wanting to stay “at a f****** motel” moments before apparently shooting herself in the head.

An investigation into the ordeal is still ongoing as police face mounting questions over how the fugitives evaded capture for over a week.

Alabama fugitive inmate Casey Cole White and his corrections officer lover Vicky White paid a local homeless man to check them into an Indiana motel as they tried to lay low during their time on the run, according to authorities.

The couple checked into Motel 41 in Evansville, Indiana, back on 3 May and paid cash upfront for a 14-night stay, Vanderburgh County Sheriff Dave Wedding told ABC31.

Dramatic police footage has been released of the moment that capital murder suspect Casey Cole White was captured and his prison guard lover Vicky White’s body was pulled from their vehicle with a gun still in her hand.

The suspected murderer recaptured after 10 days on the run has been involved in a series of crimes and suspected offences, writes Rachel Sharp.

Police have reopened an investigation into the mysterious death of escaped Alabama inmate Casey White’s former girlfriend, after her 2008 shooting death was previously ruled a suicide.

Christy Shelton, 31, died on 1 February 2008 after she was shot in the chest by a sawed-off shotgun inside an Alabama home belonging to White’s mother.

A one-time lawyer for murder suspect Casey White, who managed to break out of prison and evade police for 10 days with the help of Alabama corrections officer Vicky White, says there is ‘no way’ his former client planned the full escape scheme.

His former lawyer, Dale Bryant, spoke to WHNT, telling the outlet that White has a mental illness that makes him impulsive and a threat to individuals outside of a structured and controlled environment.

“This plan, this escape was detailed. It was thorough,” Mr Bryant said. “The escape, in general, is exactly what Casey wants to do, is get out of prison, right? But it is well thought out and the planning is, again, nothing that is in Casey’s norm.”

A chilling 911 call released on Tuesday night reveals the final moments of Alabama corrections officer Vicky White, and the haunting words she said to her jailhouse lover Casey White: “Let’s get out and run,” an utterance that was said just before authorities say she took her own life by shooting herself in the head.

At the start of the seven-minute audio, the dispatcher is heard on the line saying “911” and “hello” before the voice on the other end, Ms White, is heard in the background saying “oh my god” and “stop, stop”.

It’s unclear which of the two placed the initial call to the emergency line.

You can then hear Ms White saying in a panicked cry, “The airbags are going to go off” before she says what were likely some of her last words: “Airbags are going off. Let’s get out and run.”

Continue reading the full article from The Independent’s Rachel Sharp below.

Dramatic police footage has been released of the moment that capital murder suspect Casey Cole White was captured and his prison guard lover Vicky White’s body was pulled from their vehicle with a gun still in her hand.

Evansville Police Department shared the footage on Tuesday night as the coroner ruled the Alabama corrections officer’s death a suicide and shocking audio also revealed she was on the phone to a 911 dispatcher at the time of the crash.

In the footage, you can see the moment White is placed in cuffs, as he is held there for a few moments before the officers pull him to his feet and lead him away.

Read the full story from The Independent’s Rachel Sharp below.

The owner of the motel — where the Cadillac connected to Vicky White and Casey White was seen – has denied seeing the fugitives and claimed that he didn’t know if they were staying on his property.

Paul Shah was quoted as saying by CNN that “I’ve never seen those people in my property.” He, however, did say that it could be possible that they were visiting someone in the Motel 41 in Evansville.“Nothing happened in my parking lot,” Mr Shah said, referring to the capture of the two on Monday afternoon.

He said that he hadn’t seen the news of the search for the two and was surprised everything unfolded in this area. “This is one of the safest area(s) of this town.”

Fugitive’s trial for 2015 murder set to start in June

Casey White’s murder trial will start in June, it was reported.

After an emergency hearing on Tuesday regarding the capital case against White for Ridgeway’s 2015 murder, her son Austin Williams was quoted as saying by CNN that the fugitive’s capture was a “huge relief” and that “it felt like a miracle.”

Mr Williams said: “I’ve been waiting for a long time, waiting just a little bit longer, I think things will be fine. They did the right thing by getting him over to Donaldson as soon as possible and I’m just looking forward to that trial date.

“It just didn’t look very hopeful at all,” he said. “They had a head start, not a lot of leads and stuff and just felt like a really good plan and it turns out that they didn’t which was… which worked out, fortunately.”

White escaped from the Alabama jail on 29 April and was captured on Monday in Evansville, Indiana.

Police had said that the two had a cache of weapons on them as well — four handguns and several semi-automatic weapons, including an AR-15.Ms White died after suffering a gunshot wound to the head during a dramatic police chase while her inmate lover Casey White surrendered to authorities and is now back in custody.

Mr White had allegedly also referred to Ms White as his “wife.”