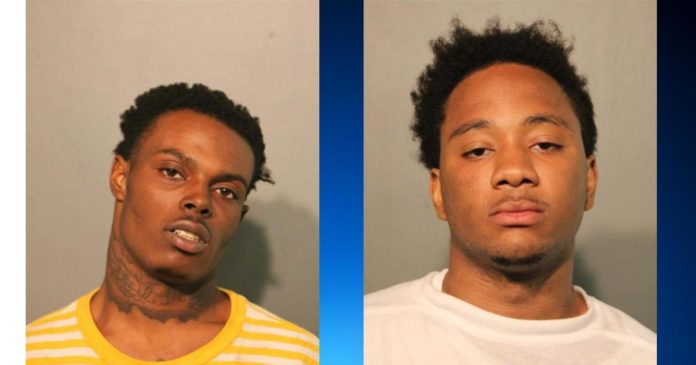 CHICAGO (CBS) — Two men are facing felony charges in the mass shooting that left two people dead and seven others wounded Thursday night on the Near North Side.

Police said somebody handed him a gun, a Glock fitted to shoot multiple bullets, and he began firing into a crowd just after 10:40 p.m. outside of the McDonald’s at Chicago Avenue and State Street. A McDonald’s window was shattered during the shooting. The restaurant is now closed.

Sanders fled into the nearby Red Line subway station after the shooting, where he was arrested by responding officers.

At the time of the shooting, Sanders was wanted on a warrant issued for his arrest on Jan. 4 of this year for previous gun charges. According to court records, he failed to appear in court for four counts of aggravated unlawful use of a weapon.

Meantime, police said 20-year-old Kameron Abram also is charged with one count of aggravated unlawful use of a weapon for his role in the shooting. He also was cited for trespassing on the CTA.

Sanders and Abram are due to appear in bond court on Sunday.

Video circulating on social media shows more the moments as more than two dozen bullets were blasted into a crowd of people, some hiding behind the bus stop for cover. Others are seen hurt, lying on the sidewalk nearby.

A total of nine people were shot. Two of the victims died, police said.

Anthony Allen, 31, died at Stroger Hospital  about an hour after the shooting. He was shot in the lower back, officials said.

Antonio Wade, 30, a soon-to-be father of two, died at Northwestern Hospital late Thursday after he was shot in the chest.

One of the victims was critically wounded. The rest are in good condition.

The gunman ran into the nearby Red Line subway and down the tunnel after the shooting, where he was arrested and a gun recovered.  A woman was critically injured when she came in contact with the electrified third rail on the tracks during the chase to apprehend the suspect.

“This is a gun crisis,” said Supt. David Brown, who once again called on prosecutors and judges to hold gun violence suspects in jail until trial.

Google: Employees can relocate ‘without justification’