As expected, Twitter has sued Elon Musk, filing a complaint drafted by Wachtell and Wilson Sonsini litigators. But as Twitter delivers over 60 pages of thoroughly brutal allegations painting Musk’s business acumen as only slightly removed from handing a seal three beach balls and several billion dollars, my primary takeaway from the complaint was: joy.

Elite law firms aren’t known for giddy feelings, but the whole deal reads as lawyer fun from start to finish. From Simpson Thacher and Wilson Sonsini negotiating a deal tailor-made for this moment, getting every concession along the way. To counseling Twitter through the deal as Musk managed to live up to every one of the attorneys’ rock-bottom expectations. To the moment Wachtell got to come in and take the deal shepherded by two other firms and turn it into an absolute scorcher of a complaint. Everyone deserves credit and the closing dinner on this one may actually cost a billion dollars and be entirely worth it.

Indeed. This is the first tweet of a thread livetweeting her reading of the complaint which is worth a look.

But the lawyerly action starts at paragraph 32:

The following day, on Sunday, April 24, 2022, Musk tried again to force Twitter’s hand. He delivered a letter to the board repeating that his $54.20 per share offer was “best and final,” threatening once more to sell all of his shares if his bid were rejected, and saying he would propose a “seller friendly” merger agreement to be signed before the market opened the next day. Musk’s counsel sent over a draft agreement, reiterated that Musk’s offer was not contingent on any due diligence, and underscored that the form of the proposed agreement was “intended to make this easy on all to get to a deal asap.”

Twitter and its counsel harbored real fears that Musk might bypass the company and take the deal directly to shareholders, so it wasn’t all fun and games in April. And that’s when Musk told them that he wanted a “seller friendly” agreement that wasn’t contingent on due diligence.

Let’s get some footage of the Twitter legal team upon hearing that:

Every good negotiation begins with taking all your leverage off the table!

But it didn’t end there, because Twitter’s transactional lawyers then got a chance to negotiate like kids in a candy store with grandma:

The agreement was negotiated through the night and, in the process, became even more seller-friendly. Among the provisions not contained in Musk’s proposal but included at Twitter’s insistence were an undertaking by defendants, including Musk, to “take or cause to be taken . . . all actions and to do, or cause to be done, all things necessary, proper or advisable” to obtain the financing (already committed) to consummate the transaction, Ex. 1 § 6.10(a); a clear disclaimer of any financing condition to closing, id. § 6.10(f); and a right on Twitter’s part to request and promptly receive updates from Musk about his progress in obtaining financing, id. § 6.10(d). These provisions ensured that financing would be no obstacle to closing and that the company would have the right to stay informed of Musk’s progress in arranging his financing.

Working through the night must have never felt so good.

The day after the parties announced the merger agreement, I predicted Tesla investors would flee in droves and blow up a huge chunk of Musk’s wealth because they would, justifiably, fear tying their money to someone who would enter a deal like this. And that was before I knew he’d ASKED for it to be seller friendly.

Twitter lawyers must have had the same thought about the risks this announcement posed to Musk’s finances because they asked for AND GOT this qualification too:

Twitter further negotiated to narrow the circumstances under which -13- defendants could escape the deal by claiming a “Company Material Adverse Effect.” In addition to excluding, for example, market-wide and industry-wide effects and circumstances and declines in stock price and financial performance, the final definition excluded matters relating to or resulting from Musk’s identity or communications, “performance” of the agreement, and any matter disclosed by Twitter in its SEC filings other than the “Risk Factors” and “Forward-Looking Statements” sections of those disclosures. Id. Art. I.

A master class in covering client ass. Which is of course a transactional attorney’s job.

It’s not like Musk didn’t have representation. Musk was represented in this deal by Skadden, prompting someone to ask me how Skadden could’ve let something like this happen. I dunno, but…

What’s Skadden supposed to do? As long as everything is legal and the firm provides Musk with complete information about what’s going on, Skadden kind of has to roll with it. I refuse to believe Skadden wanted to waive every possible protection to create an absolute disaster of a deal for Musk, but based on the narrative of the complaint, he seems to have kept telling them to go ahead.

It’s hard to imagine it will come to that, because specific performance is such a drastic form of relief and one expects that someone will prevail upon Musk to settle before that happens. But Twitter obviously owes it to its shareholders to demand the full $40-some-odd billion rather than settling for the $1B alternative relief — though given Musk’s antics, it’s probably in the best interests of the shareholders to take less and keep Musk’s hands away from the rudder.

After celebrating a slam dunk agreement, Twitter lawyers had to weather the road to closing. Musk had waived due diligence so nothing could really derail this deal “absent a Company Material Adverse Effect or a material covenant breach by Twitter.” As the complaint notes, “Musk had to try to conjure one of those.”

He began slow with disparaging posts about Twitter, giving Twitter an excuse to kill the deal. With billions and billions on the line, Twitter refused the bait.

So then he goes after the existence of bots. Twitter has made consistent, qualified representations that bots make up fewer than 5 percent of its users. Despite waiving diligence and having made the existence of bots one of the reasons for his decision to buy the company, Musk suddenly demanded to know more about bots and threatened the deal if bots amounted to more than 5 percent (which… unless they amounted to something crazy like 50 percent there’s little chance it would be material, but this is the smell of desperation here).

So Twitter gave him a detailed report on how it calculates bots on May 13 (sample of roughly 9,000 accounts). Musk immediately goes on Twitter and says Twitter samples 100 accounts?!?! Then he tweets about Twitter complaining that he seemingly lied about the methodology. And then on June 30…

Indeed, in a June 30 conversation with [Twitter CFO Ned] Segal, Musk acknowledged he had not read the detailed summary of Twitter’s sampling process provided back in May.

Holy hell. What is even going on here? He’s tweeting allegedly wild misrepresentations about the methodology before reading it? This is the moment firms started preparing their pitches for the litigation business.

Musk’s whole defense seems to be that Twitter didn’t give him information when the allegations suggest he waived his rights to most information, they provided him with tons of information gratuitously (including a raw feed of all of Twitter amounting to 49 tebibytes which I didn’t even know was a real number until now), and then this galaxy brain admits to Twitter that he’s not even looking at it.

Musk’s got Skadden already and is bringing on Quinn Emanuel for this case. I’m thinking, for them, this set of facts does not spark joy.

And Musk’s continued tweeting definitely doesn’t. You know there was an internet hoax claiming that Twitter had banned Musk after the deal went sour. Why? He’s just pumping out more and more damning evidence for Twitter’s claim that he’s only trying to hurt the company and exit the deal. Let him keep talking!

In the early morning of July 11 (Eastern time), Musk posted Tweets implying that his data requests were never intended to make progress toward consummating the merger, but rather were part of a plan to force litigation in which Twitter’s information would be publicly disclosed: 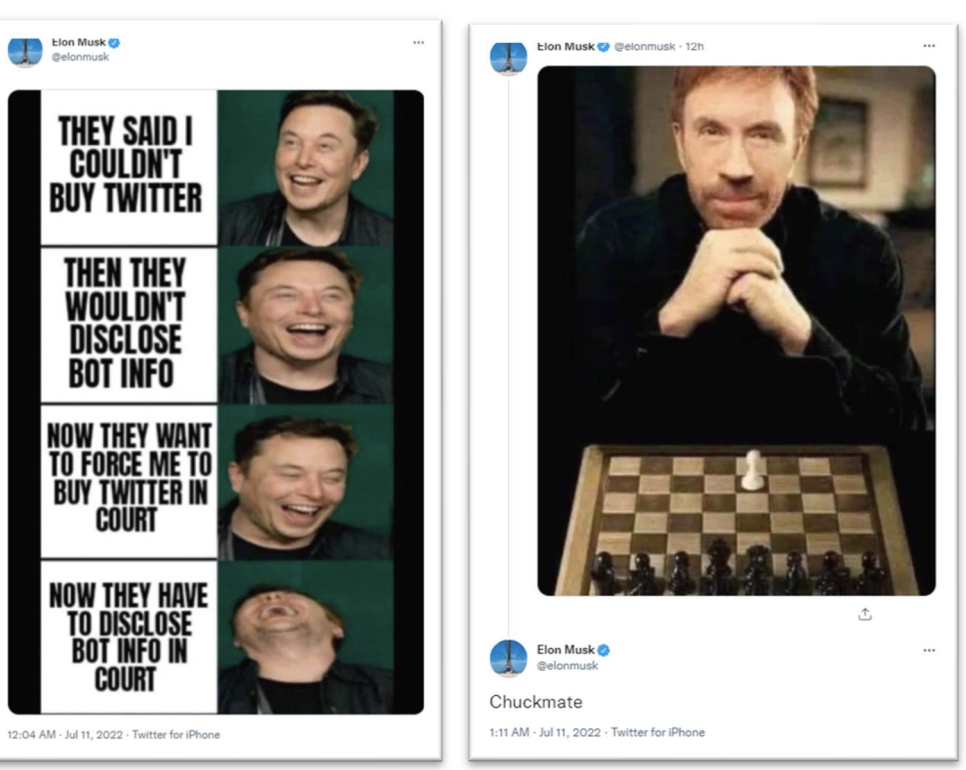 We talked about that one on the left earlier in the week, noting that Professor Hasen had already pegged that one for an exhibit number. So it’s safe to say that the lawyerly joy of watching every prediction in this case come to pass immediately has spread to law professors too.

I continue to be flummoxed by Musk’s theory that he’ll ever see this data in court. How is it relevant? He waived diligence and Twitter claims that its public SEC filings reflect its testing methodology. The only relevant evidence would seem to be “what’s your methodology and does it consistently turn up a fewer than 5 percent figure?” He agreed to buy the company based on that representation so the only discovery he should get would be limited to those reps… which is probably all in the report he’s never read anyway.

There’s a long way to go and Musk will have a chance to explain all of this, though with most of the worst allegations backed by publicly available tweets, it’s hard to see how.

But right now, let’s just appreciate the moment. This is one of those rare cases where everyone (on Twitter’s side anyway) from the birth of the deal to the courthouse steps has seen the fruits of their labor immediately pay off. For a job that’s usually messy and built off compromise and caveats, that’s fun to witness.

Complaint on the next page.

Joe Patrice is a senior editor at Above the Law and co-host of Thinking Like A Lawyer. Feel free to email any tips, questions, or comments. Follow him on Twitter if you’re interested in law, politics, and a healthy dose of college sports news. Joe also serves as a Managing Director at RPN Executive Search.