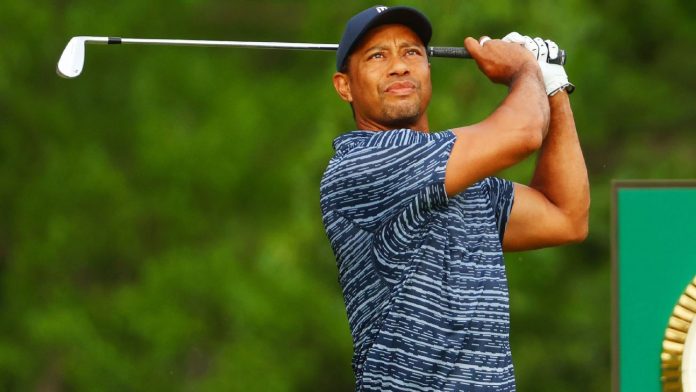 TULSA, Okla. — Tiger Woods was cruising through the first round of the 104th PGA Championship at Southern Hills Country Club on Thursday.

The 15-time major champion crushed his opening tee shot with a 3-wood down the middle on No. 10 and birdied his first hole. He was 2 under after making another birdie on the par-3 14th.

Even after a bogey on the par-4 15th, Woods seemed to be in better shape than the last time golf fans saw him, six weeks earlier, when he labored through the weekend and finished 47th at the Masters. He seemed to be more fluid and explosive off the tee, more accurate hitting approach shots and more confident putting.

But then something happened on his second shot on the par-4 18th. After hitting his tee shot to the perfect spot, just short of the creek on the right side of the fairway, Woods pulled his approach shot into a greenside bunker. He slammed his wedge into the turf in frustration.

For the first time in the round, after that shot, Woods seemed uncomfortable and was limping more noticeably on his surgically repaired right leg. He bogeyed the 18th hole and made the turn at even par.

Woods, 46, bogeyed the next two holes, too, and was suddenly 2 over. He recovered to birdie the par-4 third hole but bogeyed three more holes, including his last two. He ended up finishing at 4-over 74.

Woods hit 10 of 14 fairways in the round but just 7 of 18 greens. He was 2-for-6 on sand saves and 4 of 11 scrambling, after leaving himself with too many tricky putts. A few of his trademark “stingers” off the tee were offline.

Playing in just his second official tour event since he was seriously injured in a car accident outside Los Angeles in February 2021, Woods got off to a promising start this round. Playing with four-time major winner Rory McIlroy and three-time winner Jordan Spieth in a marquee group, all eyes were once again on Woods at Southern Hills, where he won his last PGA Championship in 2007.

As Woods walked down the fairway of the 10th hole after hitting his opening tee shot, he turned to a cameraman, who had gotten a little too close.

“Would you mind giving me some breathing room, please?” Woods asked him.

Woods, who has won the PGA Championship four times, had golf fans holding their collective breath. Starting on the back nine, he ripped a 3-wood down the middle on No. 10 on his opening shot of the round. He knocked his second shot from 95 yards to 3 feet and made birdie.

At the beginning of the round, Woods looked much more flexible and comfortable than he did when he finished 47th at the Masters about six weeks ago. He didn’t limp as much on his surgically repaired right leg and looked more fluid while putting.

Woods made his first big mistake on the par-4 15th. He nearly shanked his tee shot with a 2-iron, and his ball ended up in the rough on the right side. He knocked his second shot into a greenside bunker and blasted his third about 21 feet past the hole. He two-putted for a bogey.

Near the 15th anniversary of his last victory at Southern Hills, Woods finds himself in a familiar position after the first round. In 2007, he was 6 shots off the lead after the first 18 holes but fired a 7-under 63 in the second round to tie what was then the lowest single-round score at a men’s major and the course record.