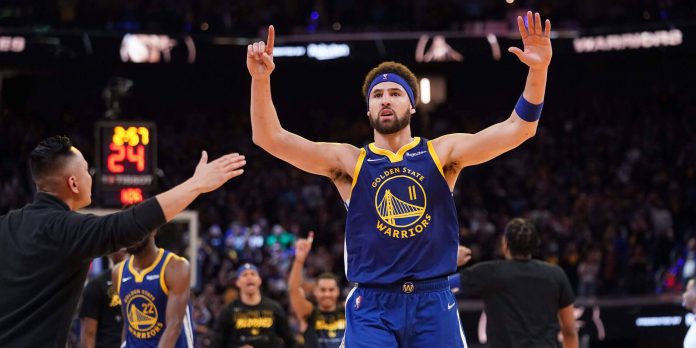 SAN FRANCISCO — Klay Thompson was livid after the Beatdown on Beale Street. But his anger subsided as Game 6 drew closer. It had to. As awful as it was to be humiliated by Memphis, this wasn’t a time for fury. Instead, reflection.

Thompson prepared himself for Friday’s elimination game by remembering the journey. The 941 days. The taxing his body and mind endured. The audacity required to make it back to postseason basketball. He said he prepared his mind for the showdown with the Grizzlies at Chase Center by watching highlights of past Game 6 performances, just to remember that rarified air he once breathed. A playoff-record 11 3s and 41 points in Oklahoma City in 2016. And 35 points against Houston at Oracle Arena in 2018. And 27 at Houston the next playoffs, including seven 3s. Even his 30 against Toronto in the Finals in Oakland, before the injury that trenched new depths of his resolve.

He then spent some time with Rocco, his beloved bulldog who’s been with him through just about everything. They took in the sights of the Bay Area together. Enjoying the scenery, bathing in gratitude. This time, appreciation would fuel “Game 6 Klay.”

“I love the moments,” Thompson said. “I love the pressure. I love playing basketball at the highest level. Our careers, we are not singers, we are not actors. We can’t do this till our elder years. So while we are doing it, you just have to appreciate every single night, because it goes really fast.”

With three minutes left in the game, when Kevon Looney grabbed his umpteenth offensive rebound and found him, Thompson was in his calmest essence. He wasn’t overeager, as he can get. No pressing. Nothing forced, not even a dribble. The butterflies from before the game had long fluttered away. He was purely him: in rhythm, perfect balance, textbook form, picturesque splash of the net.

His eighth 3-pointer put the Warriors up by 13, all but sealing the demise of the Grizzlies and beginning the celebration of Golden State’s return to the Western Conference finals. But most of all, it punctuated the return of the iconic rendition of  No. 11.

His 30 points in the Warriors’ 110-96 win over Memphis, clinching this best-of-seven series 4-2, was him reaching the pinnacle again. Game 6 Klay is the peak of his powers. It’s not just him putting up big numbers in the sixth game of the series. It’s about the Warriors being desperate, in need of greatness to bail them out, and Thompson delivering. It’s about conjuring magic right when it seems the Warriors have run out.

The tradition continues. Memphis pushed the Warriors to the point where Game 6 Klay was needed. It’s been 35 months since he got to be this version of himself again, to feel this level of intensity coursing through his psyche. But he made it back here. He set out to refurbish what he lost with two significant leg injuries. Friday, he claimed it.

The joy of that reality took over after his dagger 3-pointer. He leaped and skipped and pumped his fist as Chase Center reached new levels of frenzy. Thompson held up six fingers to remind everyone that Game 6 Klay was in the building. This wasn’t his usual playing to the crowd, but unbridled happiness. The gratification of overcoming mixed in with the euphoria of victory. People closest to him couldn’t help but notice his bliss.

“Well, 30 sounds way better than 27,” Thompson said. “On top of that, I had a lot of pent-up energy these last couple years, and to be in this situation and to seal the game there, it all came out. I just know how hard it is to get to this part of the season, and it all just came out for me. To see the Warrior fans, it’s a moment I tried to revel in for the few seconds I had.”

The return to action was emotionally fulfilling. Playing well again was rewarding. Being in the playoffs was its own validation.

But games like Friday are what Thompson lives for. He grew to become a player who relishes the degree of difficulty. He wants to be in the biggest games against the toughest foes, taking the largest shots. Game 6 Klay is the offspring of his mentality.

That’s why this Game 6 was so special. It’s proof he is still the player he believes. It’s vindication for never wavering, for enduring the bad days and rough performances. For nearly three years, he’s been exfoliating doubt from his system, diligently protecting his sanity and absorbing the lessons of adversity. Thompson emerged from this ordeal an altered man with enhanced perspective and a renewed sense of his capacity. He endured more than he ever has and was challenged in ways he never imagined. And it was all in search of the player who showed up Friday.

This was arguably the most he’s felt like his old self since June 2019. Despite two major surgeries, being 32 years old, his lateral quickness taking a hit and the rest of the league adopting a style of play he helped popularize, Thompson promised himself he would get back to this level.

He’s wanted so badly to be this player again. He put in so much work to be ready when the next Game 6 knocked at his door.

Sometimes it works against him. He’s wanted it too badly, too immediately, and his anxiousness has taken the wheel a few times. Such has produced some clunkers — forcing shots, breaking away from the offense, lots of dribbling. Thompson’s relentless belief in himself at times didn’t leave room for the inevitable struggles after so much time off. Some concern existed about him trying to summon Game 6 Klay.

What would happen to his confidence if he just couldn’t anymore? What if chasing the legend coaxed him into a poor performance? The mental toll of this journey already has been mighty. How much more disappointment could he take?

But Game 6 Klay wasn’t born of doubt. He exists because of his willingness to risk failure in pursuit of glory. He would have no use for apprehension now. He pulled up to the biggest game of the season, his biggest since June 2019, wearing some jeans and a blazer on a bike with a helmet over his beanie. Shrinking ain’t in his nature.

He made his first 3 from deep, making it clear he wasn’t going to pass on this chance to resurrect the icon.

“We went on a two-year hiatus in the playoffs in large part due to his absence and what he brings to the table,” Draymond Green said. “I know for most people, that’s 3-point shooting. For us, that’s a competitive edge that no one else on this team has. I know I get a lot of the credit for that side of things and just bringing the intensity. But like I tell y’all all the time, one of the toughest guys and most competitive guys I’ve ever played with — no, probably the toughest and most competitive player I’ve ever played with — and it showed up tonight.”

The Warriors, after a hot start from 3-point range, had grown cold. A wave of nerves rippled through Chase Center as the Warriors missed 12 straight from deep and Memphis was controlling the game. Stephen Curry and Jordan Poole were struggling with their shots. Andrew Wiggins had a rough half. The Warriors needed some life and to snatch some confidence from the Grizzlies.

It was the perfect moment for Thompson, who was 6-for-10 in the first half and made five 3s. He was still feeling it.

“From the first shot he hit,” Curry said, “it’s what he’s been looking forward to since he got hurt back in the 2019 Finals. It’s a different joy. It’s a different energy. When you see him getting off, especially in front of our home crowd, it’s just fun to watch.”

They had an extra sauce on them too. Bane said last week he was the second-best shooter in the league behind Curry. Thompson was appalled at such a declaration. Only his trademark honesty allows him to admit Curry is a better shooter, though it violates every fiber of his being. A second-year player dropping him to third?

“Guy said he was a better shooter than me,” Thompson scoffed to an acquaintance in the hallway of Chase Center after Game 3.

This is why Game 6 Klay had to return. Because 941 days away from the game is long enough to forget why he’s a legend. He was just reaching another level when he was injured, but he didn’t get to stay long enough to secure his seat. So, he vowed to remind everyone, including himself. While he’s still got some room to go in reclaiming his former greatness, the apex of basketball elitism is delivering when the stakes are high.

After a transition layup past Grizzlies point guard Tyus Jones, Thompson had 10 points in two minutes, 42 seconds. The Warriors’ offense was awakened from its doldrums. Memphis was forced to switch Dillon Brooks, its best perimeter defender, off Curry and onto Thompson.

Wiggins got going in the fourth quarter, and Curry scored 11 of his 29 points down the stretch to close out the Grizzlies. But it was all possible because of Thompson. Even the Grizzlies, with all their talent and youthful vigor, met the same fate as the great ones he took down years ago.

“He lives up to his reputation,” Looney said. “Whenever we need him in big games, he always shows up. After being out for two years and to have a game like this and close a team out that is that good and take us to the Western Conference finals, that’s big for him, for our team and for this organization. Klay set the tone for us, and we kind of followed his lead. When things got slow or static, he carried us.

“We did not expect nothing different from Klay. We were all excited to see Game 6 Klay show up, and he did.”

When the hardwood became coronation grounds for the Warriors, and the home team got to breathe a sigh of relief, Poole hugged Thompson from behind. The third-year guard who kept Thompson’s spot warm until he returned squeezed the Warriors vet while jumping up and down, yelling “Game 6 Klay! Game 6 Klay!” Thompson was beaming.

He received flowers from the Grizzlies. He celebrated with his teammates and embraced the love from the Warriors fans who adore him. Then he lingered on the court a little longer, allowing himself to cherish what his perseverance earned.

It took him a long time to breathe this air again.

“It felt better (than before), honestly,” Thompson said. “Especially with the perspective I’ve gained from the injuries I’ve had. To now be able to compete at the highest level and be one of the final four teams, it’s a feeling that’s hard to describe, honestly. It’s truly amazing, and it just inspires me to keep going.”

Amick: Warriors-Grizzlies had an iron-sharpens-iron feel
Katz: Young Grizzlies prove they can hang with the elite