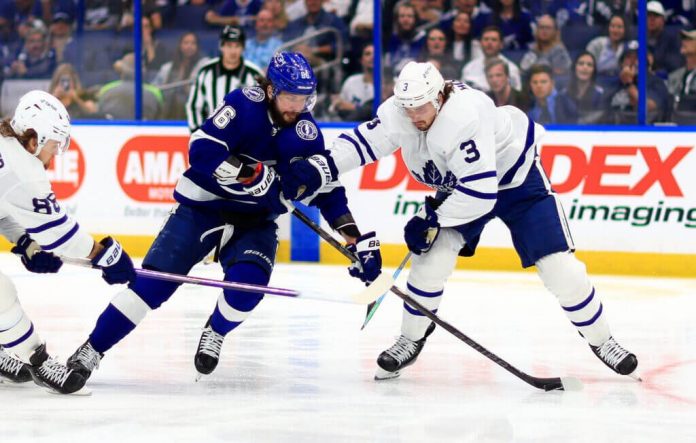 Three Game 7s in one day? What a treat for hockey fans. The first round of the Stanley Cup Playoffs has been full of tight series and Saturday’s trio of Game 7s is the best example.

This is the first time in eight years there have been three Game 7s on the same day. On top of that the matchups are interesting for a number of reasons as well. The marquee matchup is probably Tampa Bay at Toronto. Toronto hasn’t won a playoff series since 2004 and Tampa Bay is the two-time defending Stanley Cup champion.

Every day during the Stanley Cup Playoffs, The Athletic’s writers will make their picks, straight up. We put our picks, the TV schedule and all series coverage, plus the latest odds, all in one place for fans to easily digest and follow. Our in-depth NHL coverage is linked below the picks. For live NHL odds from BetMGM, click here.

Who was the guy? It’s safe and boring, probably, to pick Brad Marchand in this spot. He’s consistently great, and Thursday night was a quiet one on the extracurricular side of the street. But he still had a huge impact; he scored first, which was the first time Boston has managed that in the series, and his line — you may have heard of the other two guys there, as well — was outstanding.

What was the key? After Marchand’s goal, it was all about Boston’s support players. It’s been true of the Bruins for a couple of years now: If they get something from the middle six, they’re a dangerous team. It just doesn’t happen with enough regularity. On Thursday, though, they got goals from Charlie Coyle, Erik Haula, Derek Forbort and Curtis Lazar. If they get that in Game 7, look out, Carolina — and if they get it consistently, look out, everyone else.

Key stat: If Boston wins Game 7, it’ll be its 16th such victory in franchise history, breaking a tie with the Canadiens. If the Hurricanes win Game 7, it’ll be their sixth straight, tying an NHL record most recently equaled by the Rangers in 2015.

Bruins worry meter: 🤪🤪🤪🤪 … Momentum doesn’t carry over from game to game, but it helps to come into Game 7 off a win.

Hurricanes worry meter: 🤯🤯🤯🤯🤯 … They certainly should feel more pressure than Boston; they were one of the few best teams in the league during the regular season and beat the hell out of the Bruins each time they met.

What was the key? Before we get to it, I want to say this: the Maple Leafs did so much right on Thursday. They came back from an early deficit again, showing truly impressive resilience. For a team whose mental makeup in big moments has been (fairly) questioned, it was huge to see them turn a 2-0 hole into a 3-2 lead in a close-out road game. In some alternate universe, that’s the story of the game. But two high sticking penalties midway through the third (one deserved, one pretty obviously a blown call) gave the Lightning a long 5-on-3. Nikita Kucherov capitalized, tying the game at three and ultimately forcing overtime. Even after that, though, the Leafs had a strong showing in the extra frame, until a bang-bang play — that started with Auston Matthews, who was excellent in the game, blowing a tire — that wiped away what should have been such a success story.

Key stat? 0-and-8. That’s the Maple Leafs record in closeout games since 2017, with their current core intact. They have another chance on Saturday to end this narrative. But it’s the stat that will hover above all others until they do.

Maple Leafs worry meter: 🤯🤯🤯🤯🤯 … It was right there for the taking, and they really did play well Thursday. They’re also getting Game 7 at home. The bad news? Well, you know.

Lightning worry meter: 🥴🥴🥴🥴 … Maybe this should be higher, considering they were very nearly golf-bound Thursday. But they just don’t have demons the Leafs do.

Who was the guy? To the surprise of absolutely nobody, Connor McDavid was king with the Oilers’ backs against the wall. McDavid opened the scoring less than a minute in. He had the zone entry and secondary assist on Tyson Barrie’s game-winner. And he put a bow on it all with a strong defensive play on the back check to strip Andreas Athanasiou and send Evander Kane in for the empty-net insurance marker.

From beginning to end, No.97 was a workhorse. With McDavid on the ice, the Oilers had 20 shots on goal and 3 goals at five-on-five. The Kings as an entire team had 24 shots and 1 goal at 5-on-5.

Key stat: Edmonton won the 5-on-5 battle to the tune of a 3-1 margin. The Oilers’ special teams have been so strong for most of this series but what’s outdone them is how badly they’ve been beaten down at evens — they’ve been outscored 10-2 at 5-on-5 in their losses. L.A. was snatching wins by dominating the even-strength battle. It was pivotal for Edmonton to at least hold its own at evens, they did one better by decisively winning it thanks to McDavid.

Kings worry meter: 🤯🤯🤯🤯🤯 … They have a legit shot to win Game 7, but it doesn’t help that they’re now on the road, have McDavid en fuego and Darnell Nurse returns.