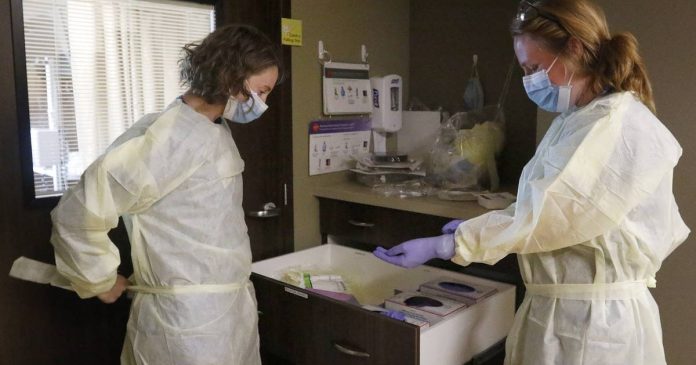 The rate of new COVID-19 cases in McHenry County increased by 39% since last week as the rate of new hospitalizations also rose, county and state health department data shows.

The county’s COVID-19 incidence rate was 293.13 new cases per 100,000 residents over the past seven days as of Sunday, up from 216.11 a week before and the highest it’s been since Feb. 11, according to McHenry County Department of Health data.

McHenry County has now seen 79,361 total COVID-19 cases, including 483 confirmed deaths and 45 deaths where COVID-19 was likely the cause but was not confirmed as of Friday. No new deaths were reported in the last week.

The level COVID-19 stayed at medium, a level the McHenry County Department of Health first reported one week ago.

That means the county saw more than 200 cases per 100,000 residents over the past seven days; the number of people being admitted to the hospital for COVID-19 was fewer than 10 per 100,000 residents, also over seven days; and the percentage of staffed inpatient beds occupied by COVID-19 patients was less than 10%, as measured by a seven-day average, according to the Centers for Disease Control and Prevention.

The rate of COVID-19 cases among 12- to 17-year-olds in McHenry County rose and fell over the course of the week, ending at 11 new cases each day as of Friday, the same as one week earlier, IDPH data shows.

Children 5 to 11 years old saw their rate of new cases in the county fall over the past week from 16.6 new cases each day to 14.3, according to the seven-day rolling averages reported Friday by the the state.

Cases among newborns to 4-year-olds increased to 5.6 new cases each day compared with 3.7 the week before, according to state data.

Hospital admissions tied to COVID-19 have been rising, with the seven-day rolling average hitting four new patients per day as of Tuesday, the eighth consecutive day at that level, the IDPH reported. Until May 3, the average had stayed between one and three since Feb. 17.

Hospital intensive care unit availability across McHenry and Lake counties declined to 25% as of Thursday, down from 28% a week earlier, according to the seven-day average reported by the IDPH.

Across Illinois, the seven-day rolling average for the number of new hospital admissions tied to COVID-19 was 79 as of Tuesday, the IDPH reported. Of the 909 hospitalized for COVID-19, 87 were in the ICU and 25 were on ventilators as of Thursday.

A total of 201,747, or an estimated 65.38% of McHenry County’s population, now are fully vaccinated, meaning they’ve received all doses recommended for the vaccine they were given.

Illinois’ daily case rate stood at 44.9 new cases per 100,000 people, according to the seven-day rolling average reported Friday, with 45 deaths reported in the past week. Illinois now has seen 3,209,341 COVID-19 cases, 33,705 confirmed deaths and 4,300 deaths where COVID-19 was the probable cause but not confirmed.

Among McHenry County ZIP codes, Crystal Lake (60014) has the highest total number of COVID-19 cases over the course of the pandemic with a total of 13,012 confirmed, according to county data. McHenry (60050) follows with 9,077.