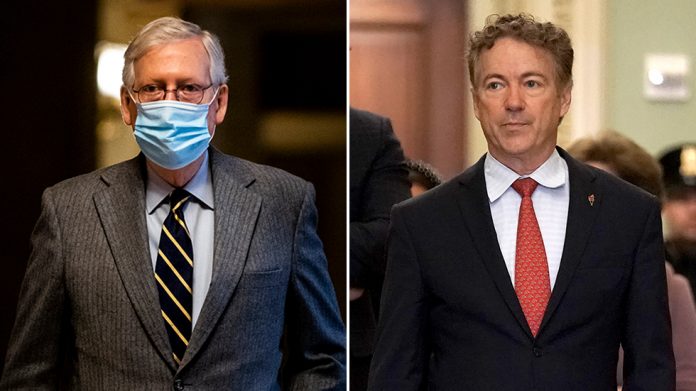 “My colleague, Senator Paul, has always been basically an isolationist. He’s proud of it and believes that’s where America ought to be. That is a tiny percentage of the Senate Republican Conference,” McConnell told Fox News’ Bret Baier on Thursday.

“There’s always been a strand of isolationism in our party, but it’s not anywhere near the dominant view, which was expressed in the vote that we had today and will be expressed again when we vote on the admission of Finland and Sweden into NATO,” he added.

Paul was among 11 GOP senators who voted against the $40 billion aid package for Ukraine earlier Thursday. The Kentucky Republican last week kept the chamber from quickly advancing the legislation after it passed the House earlier this month.

“We only had 11 votes against the package. I predict we will have even fewer votes opposed to the admission of Finland and Sweden into NATO,” McConnell said on Fox, predicting more than two-thirds of the Senate would vote to back Finland and Sweden’s NATO bids.

The Ukraine aid package that passed the upper chamber Thursday includes $9 billion to refill stockpiles for weapons sent to Ukraine and close to $9 billion for the Ukrainian government to continue its operations and combat human trafficking, among other provisions.

“If Congress really believed giving Ukraine $40B was in our national interest, they could easily pay for it by taxing every income taxpayer $500. My guess is they choose to borrow the $ bc Americans might just decide they need the $500 more to pay for gas,” Paul tweeted Thursday morning.

The passage of the aid package was lauded by Ukrainian President Volodymyr Zelensky.

“I praise the [U.S.] Senate’s approval of the Additional Ukraine Supplemental Appropriations Act of 2022. $ 40 billion is a significant [U.S.] contribution to the restoration of peace and security in Ukraine, Europe and the world. We look forward to the signing of the law by @POTUS,” he wrote on Twitter.

President Biden is expected to sign the legislation soon.