As reported in the journal Frontiers of Medicine , a team of German scientists from the Academic Clinic Munich-Bogenhausen used medical procedures and historical research to identify a 17th century mummified child entombed in an Austrian crypt reserved exclusively for members of an influential aristocratic family.

Performing what they refer to as a “virtual autopsy,” the scientists, who were led by Dr. Andreas Nerlich, used CT scans , family records, radiocarbon dating , and data collected from archaeological excavations to identify the buried toddler as one Reichard Wilhelm, who was born in 1625 and died in 1626. Little Reichard belonged to an aristocratic family known as the Counts of Starhemberg, or the Starhembergs, who had so much power and wealth that some of them actually achieved princely status in Austria by 1765.

Yet despite his exalted family status, it seems the young fellow died from a case of pneumonia that was complicated by extreme nutritional deficiency.

The child mummy of the Hellmonsödt crypt. Overview of the complete body with the silk coat. ( Frontiers in Medicine )

The small child was one of many bodies buried inside the crypt. But while all the other individuals were identified by name, little Reichard was not. He was placed inside an unmarked wooden coffin, instead of in an expensive metal coffin like his other deceased family members.

His burial was unique in another way, and that was in the lack of decay observed in the toddler’s soft tissues. It seems the conditions in the crypt were perfect for natural mummification to occur, meaning the boy’s state of advanced preservation was not the result of any intentional procedures.

The so-called “virtual autopsy” featured the application of CT scanning technology, which was used to measure bone lengths and stages of tooth eruption. This procedure showed he was only about one year old when he passed away, and markers in his soft tissues proved he was male. 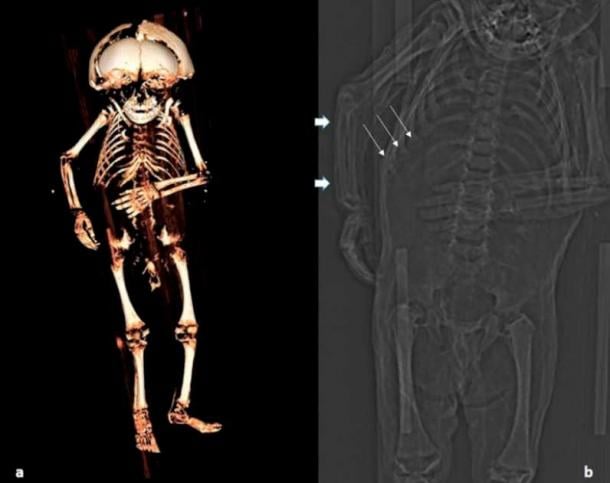 CT scan of the body:  (a) Three-dimensional reconstruction of the skeleton.  (b) A section of the topogram showing particularly the rosary of the costochondral junction (thin arrows); long bones are straight (possibly the right ulna is very slightly bent; thick arrows) and the metaphyses are minimally enlarged at upper and lower long bones. ( Frontiers in Medicine )

Curiously, this examination also found clear indications that the boy had been overweight. This is surprising, since it was equally clear he had suffered from severe malnourishment. He was obviously given food in adequate quantities, but still showed signs of having suffered from scurvy or rickets, both of which are caused by serious nutritional deficiencies.

In the case of rickets, this disease is a consequence of a vitamin D deficiency, which in turn results from a sustained lack of exposure to sunlight.

The typical bowing of bones caused by rickets was not observed, and this may have been because the boy never learned to walk or even crawl. This suggests he was very weak as a result of his malnourishment, which persisted despite the fact he was apparently fed regularly.

The virtual autopsy found inflammation of little Reichard’s lungs, which is a known effect of pneumonia. This respiratory condition is common in children who suffer from rickets, meaning his nutritional deficiencies were ultimately implicated in his tragic early death.

“The combination of obesity along with a severe vitamin-deficiency can only be explained by a generally ‘good’ nutritional status along with an almost complete lack of sunlight exposure,” said Dr. Nerlich in a Frontier Science News press release, summarizing his team’s findings related to the boy’s poor health and early death. “We have to reconsider the living conditions of high aristocratic infants of previous populations.”

It would seem the boy’s parents didn’t understand that he needed sunlight to survive. Rather than suffering from neglect, he may have succumbed to an overprotectiveness that put him at high risk for early death. 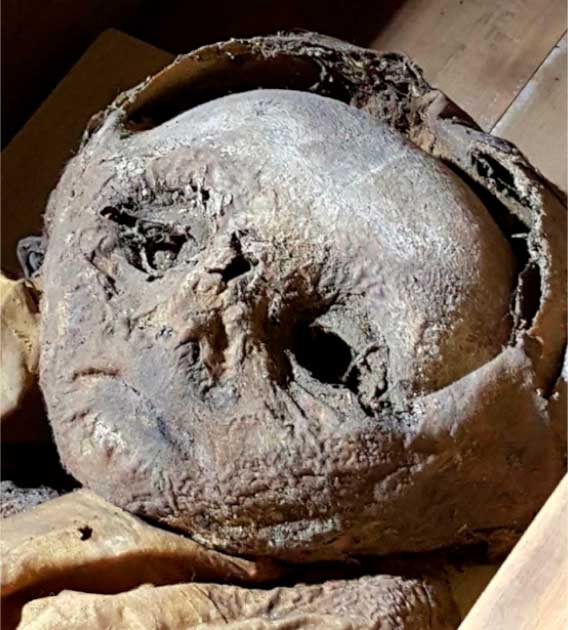 Detail of the mummy’s face. Note here the defects of the skin at the chin and nose and the gap between the frontal bone and the silk hood. ( Frontiers in Medicine )

As for the matter of the boy’s identity, this was determined by data collected through a variety of means.

A close examination of his clothing revealed that the boy had been buried in a long, hooded coat weaved from expensive silk, of a type that would have been reserved for Austrian elites. Notably, the family crypt was mainly used to bury the first-born sons of the aristocratic Counts of Starhemberg, and that was a significant clue about the boy’s true identity.

Radiocarbon dating of the child’s skeleton showed he had lived and died sometime between the years 1550 and 1635. Fortunately the scientists were able to narrow this window, by examining historical records that indicated the crypt had been renovated in the year 1600. Because of the placement and condition of the child’s coffin, it was clear he was buried there sometime after that date.

From this point, it was simply a matter of searching historical records to see if any infants who were first-born sons of Counts of Starhemberg had died between 1600 and 1635. The child was in fact the only infant buried in the crypt, and the official records confirmed that he must have been Reichard Wilhelm von Starhemberg, who according to the family’s account had been placed beside his grandfather and namesake, the original Reichard von Starhemberg.

The Shape of Things to Come

The German scientists were determined to learn as much about the toddler and his life as possible, seeking to establish his identity and cause of death using every possible source of information available. Their multi-source approach proved highly successful, and as such could be a preview of things to come.

“This is only one case,” Dr. Nerlich acknowledged. “But as we know that the early infant death rates generally were very high at that time, our observations may have considerable impact in the over-all life reconstruction of infants even in higher social classes.”

Top image: Detail of the Austrian child mummy’s face and left hand on the abdomen.  Source: Frontiers in Medicine

Teens’ brains aged faster during the first year of the pandemic, study says, and stress may be to blame

Who will the new Alzheimer’s drug help?