Johnny Depp has addressed the elephant in the room — which is that he’s seen as a pariah in Hollywood now … something that isn’t lost on him, and which he seems to think is BS.

The embattled actor sat for an interview with the Sunday Times — to promote his new movie, “Minamata” — and he opened up about what he perceives as a de facto ousting from the biz, while also vowing to shed more light on the “truth” and thanking fans for sticking with him.

“I’m being boycotted by Hollywood”

From pin-up to pariah — can Johnny Depp make a comeback? In his first interview since everything went wrong, the actor talks to The Sunday Times https://t.co/SO4SopZQKy

Johnny is quoted as saying that he feels like those who got on board late for his latest flick owe the real-life Japanese mercury poison survivors on which it’s based fairness in its release — the film’s only being released in the UK, for now. A U.S. release date hasn’t been set.

The distributors, MGM, have been accused of shelving it over JD’s legal issues — an alleged reaction to which Depp says … “And for anything … for Hollywood’s boycott of me? One man, one actor in an unpleasant and messy situation, over the last number of years?”

On that topic, he goes on to say that he’s “moving towards where I need to go to make all that … to bring things to light.” Sounds like he’s talking about his acrimonious case against Amber Heard here in the U.S. — the one he still has a fighting chance to win (maybe).

Remember … he already lost a libel case over his tumultuous relationship with Heard across the pond somewhat recently, when he sued The Sun over a headline they ran that called him a “wife beater” — something a judge there found to be true in a ruling against him. 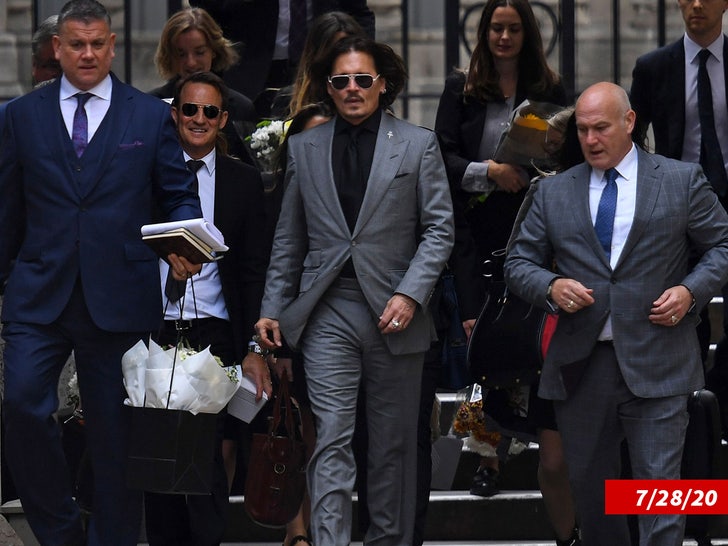 Depp lost (again) in an appeal in that case … and the book is closed there. The legal battle wages on, though, here at home as he continues to press the issue in a U.S. court — going after Amber herself for outright defamation. She, in turn, has countersued him … for a lot.

With that said, Johnny made sure to shoutout his loyal fans in this interview … because he says they’re the ones who are on the right side of history, calling them his true “employers.” He adds, “I’m proud of these people, because of what they are trying to say, which is the truth. The truth they’re trying to get out since it doesn’t in more mainstream publications.”

JD finishes by saying, “It’s a long road that sometimes gets clunky. Sometimes just plain stupid. But, they stayed on the ride with me and it’s for them I will fight. Always, to the end. Whatever it may be.”