Aussie sprint king Kyle Chalmers just missed out on the gold during his 100m freestyle final at the Tokyo Olympics – and swimming legend Ian Thorpe says it could be due to the lane he was in.

Chalmers recorded the sixth fastest time during the semi finals which put him in lane seven over on the far side of the pool for the main event.

Not placing in the top of the qualifiers for the final may have been Chalmers’ undoing, Thorpe said.

This is because the defending Olympic champ only breathes to his right when participating in sprint events which meant that in the final 50m, Chalmers couldn’t see America’s Caeleb Dressel who ultimately took the gold.

‘Look, the concern that I have for Kyle Chalmers is traditionally, he breathes on his right-hand side, which means on the way down, he will be able to see the rest of the field into Caeleb Dressel … which will help get him out in a faster split in the first 50,’ Thorpe said ahead of the race on Thursday.

‘He needs to be out faster than he was in the semi-final. If he continues to breathe on his right he won’t be able to hunt them down in the same way as he would normally, because he will be looking at Maxime Grousset in lane eight.’

After Chalmers touched the wall just 0.06 seconds behind Dressell, Thorpe said a lane change may have been the difference in him securing the win.

‘Nothing he could have done, in the lane that he was in, could have been better,’ he said.

‘Had he been in a different lane, the outcome may have changed. That’s all that can be said. You can’t change that.’

Chalmers who won the gold at the 2016 Rio Olympics admitted the lane placement was a challenge. 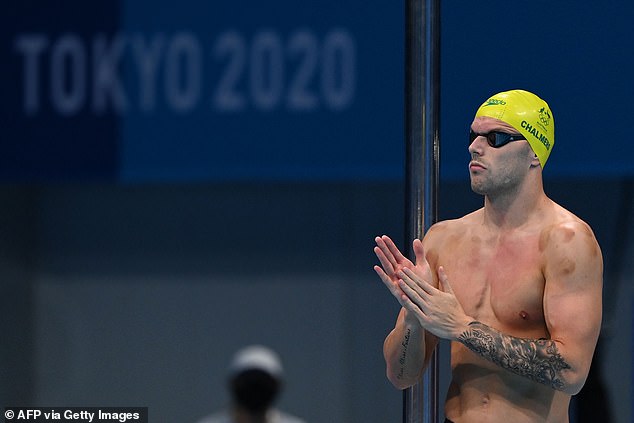 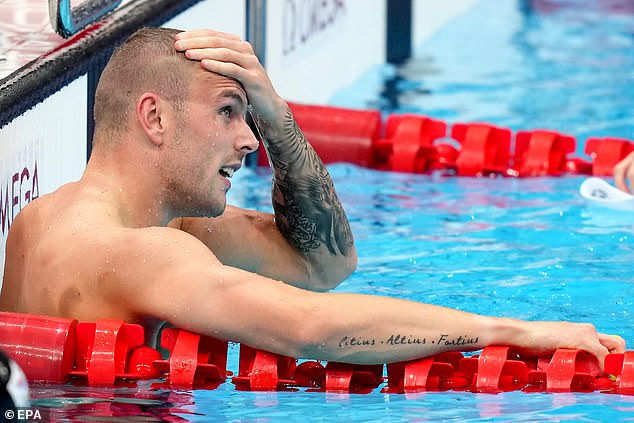 ‘It’s a bit more challenging being on the outside. I have to swim my own race from start to finish and be breathing the other way on the way home,’ he said.

Chalmers said he was re-watching his 100m freestyle win at the 2016 Olympics on Thursday morning in the lead up to the race for inspiration as he attempted to pull off back to back wins.

The 23-year-old from Port Lincoln, South Australia, touched in behind the USA’s world champion by the length of a fingernail for Australia’s second silver medal at the Tokyo Games.

‘Obviously winning isn’t everything… but it’s pretty nice,’ the devastated swimmer said post race. ‘If the games were last year, I wouldn’t be here’.

‘I’m grateful for the support, my family and friends who have been there since day one. They’ve always been there for me.’

Dressel, 24, was the oldest swimmer in the race and won gold in an Olympic record time, breaking Aussie Eamon Sullivan’s record set at the 2008 Beijing Games. 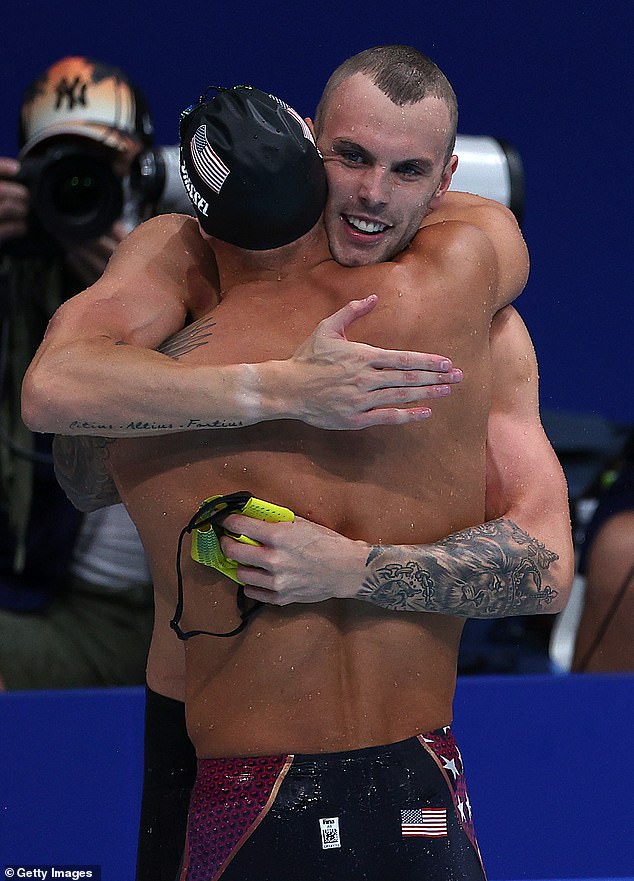 Dressel claimed gold 0.06 seconds ahead of Chalmers in the final of the 100m freestyle

Chalmers, who has said in the past he was only using swimming as ‘fitness’ for AFL, was one of the men’s best medal hopes in the pool and the anchor leg of its relay teams.

Only Dawn Fraser has repeated as 100m champion for Australia, who won her third 100m freestyle gold at the 1964 Tokyo Games.

Australia begins Thursday’s competition in fifth spot on the medal table with seven gold, one silver and nine bronze.

Chalmers was the only Australian defending an individual title in Tokyo and emerged from his semi-final with confidence.

‘I’ve always delivered at the end of the competition,’ he said. 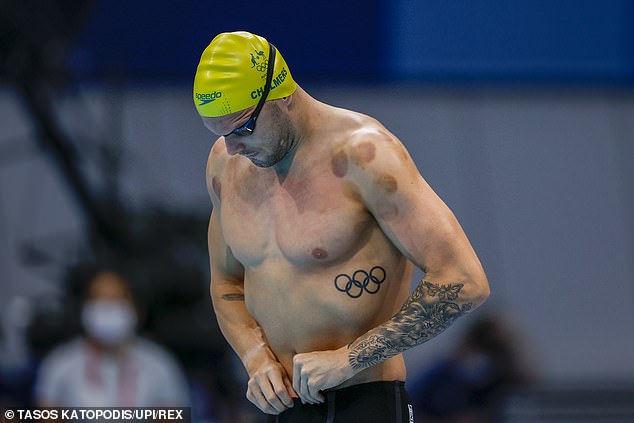 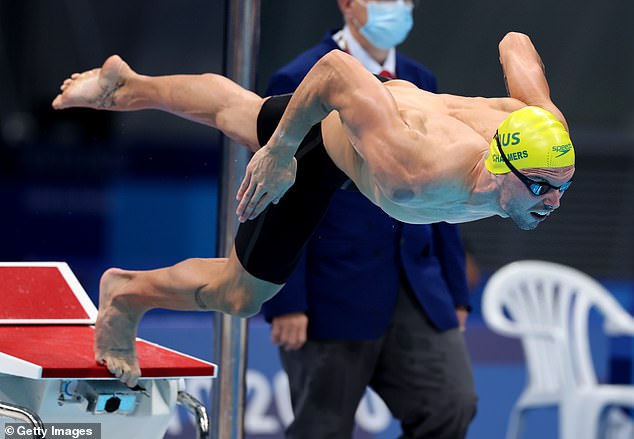 Chalmers, who came from nowhere to win gold as an 18-year-old at the 2016 Rio Olympics , was looking to become the first Aussie to repeat as the fastest man in water. 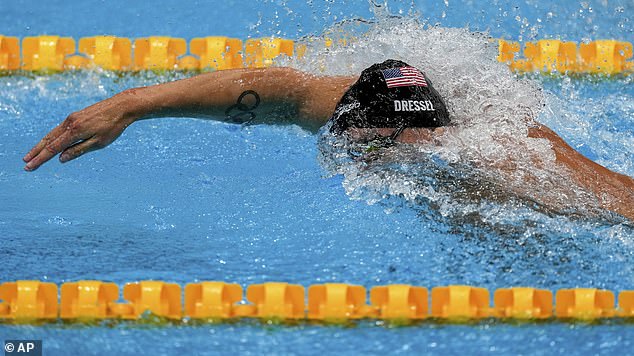 Dressel, 24, was the oldest swimmer in the race and won gold in an Olympic record time, breaking Aussie Eamon Sullivan’s record set at the 2008 Beijing Games

Earlier Zac Stubblety-Cook won gold and broke an Olympic record in the men’s 200m breaststroke final at the Tokyo Games – as the Aussie swimmers continue to dominate in the pool.

The 22-year-old from Queensland touched the wall in record time at two minutes and 6.38 seconds followed closely behind the Netherlands’ Arno Kamminga and Finnish swimmer Matti Mattsson.

Stubblety-Cook had been a favourite to win after taking out first place in the semis with the fastest time of two minutes and 7.35 seconds.

No Australian had won the 200m breaststroke final at the Olympics since the previous Games in Tokyo in 1964.

Speaking after his sensational swim to Channel 7, Stubblety-Cook said he was ‘lost for words’ while his family and long-term girlfriend Ella Martinkovic cheered him on from home.

‘Unbelievable, without their support I wouldn’t be here but it’s been a tough five years and I’m lost for words to be honest,’ he said.