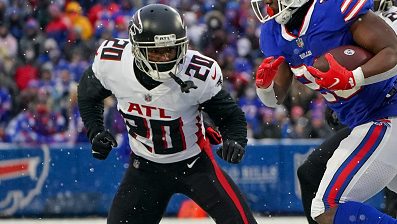 The Falcons added wide receiver Bryan Edwards to the roster in a Friday trade with the Raiders and they also parted ways with a couple of players.

The team announced that they have released cornerback Kendall Sheffield and tight end Ryan Becker from their 90-man roster.

Sheffield was a 2019 fourth-round pick by Atlanta and he appeared in 38 games in his first three seasons. He started 20 games in his first two years with the team, but only played 52 defensive snaps in nine 2021 games. He has recorded 101 tackles and two forced fumbles.

Becker signed with the Cardinals after going undrafted in 2020 and joined the Falcons last year. He has not played in a regular season game.