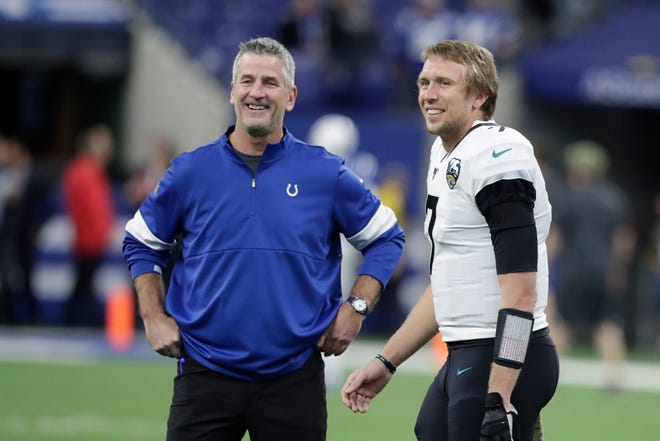 INDIANAPOLIS — The Colts have been in discussions with veteran quarterback Nick Foles about becoming the team’s primary backup behind Matt Ryan, multiple sources confirmed to IndyStar on Friday, but a contract hasn’t been reached yet.

Adding Foles in a backup role has long made sense for Indianapolis.

Foles has an excellent relationship, both personally and professionally, with Colts head coach Frank Reich from their time together in Philadelphia, and Foles also has history with Indianapolis general manager Chris Ballard after spending the 2016 season together in Kansas City.

More:Colts haven’t ruled out bringing in a veteran backup QB like Nick Foles for Matt Ryan

More:Do the Colts need a veteran backup for Matt Ryan?

Foles, 33, has long been one of the NFL’s best backup quarterbacks, a reputation cemented when he took over for an injured Carson Wentz, the Colts’ starter last season, in 2017 and took the Eagles to a Super Bowl win over New England, a game immortalized by the “Philly Special” touchdown.

Reich was the Eagles’ offensive coordinator that season, and Foles has long credited the Colts head coach for the way he played in that postseason run.

“He’s one of the greatest teachers of football,” Foles said at Reich’s Call to Courage Awards Breakfast in Buffalo two weeks ago. “I learned more with him and that staff in that season, in 2017, than I ever have.”

Foles stepped in for Wentz again in the playoffs the next season, leading the Eagles to a wild card win over Chicago and nearly beating the New Orleans Saints in the divisional round, a performance that earned him a four-year, $88 million deal to be the starter in Jacksonville.

But the quarterback broke his collarbone in the first quarter of his first game with the Jaguars, lost the job to Gardner Minshew and was traded to Chicago the next season as competition for Mitch Trubisky. Foles ended up starting seven games for the Bears in 2020, but Chicago wasn’t a good fit, and he spent the 2021 season as the team’s No. 3 quarterback, although he did lead the Bears to a 25-24 win over Seattle in his only start of the season.

“We’ve talked about (their shared history as backup quarterbacks) a little bit. Actually not a whole lot, I think it’s just been an understood thing,” Reich said. “That center, where that comes from, is a deep connection.”

Indianapolis has a need for a proven backup quarterback.

Ryan has been remarkably durable in his career, missing just three starts in 14 seasons, but the Colts only have second-year quarterback Sam Ehlinger behind him, and Ehlinger remains unproven.

Foles would immediately fill the need for a veteran backup that has been missing from the Indianapolis roster since Jacoby Brissett’s departure in free agency last offseason. When Carson Wentz was battling sprained ankles early last season, the Colts did not have a reliable backup quarterback.

Foles could be that player.