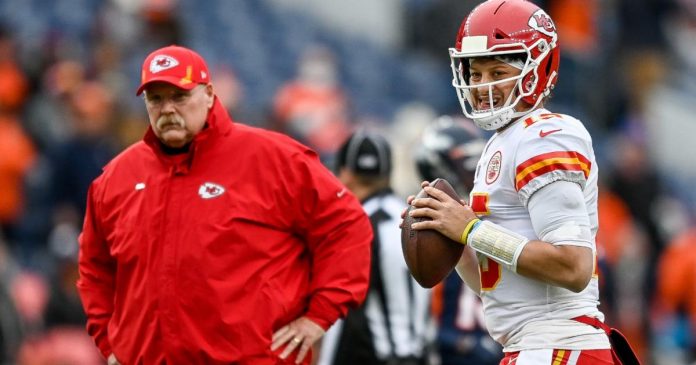 The Chiefs came up just short of reaching their third consecutive Super Bowl last season, but they did win at least 10 games for the eighth time in Andy Reid’s nine seasons in Kansas City. The team looks poised to make another deep playoff run in 2022.

Kansas City still has Patrick Mahomes as its quarterback and has upgraded its defense during the 2022 offseason. The team spent seven of its 10 draft picks on defensive players and seems poised to have better depth this season, especially across from Frank Clark.

However, the Chiefs are also a bit less top-heavy, especially on offense. Tyreek Hill was traded to the Dolphins while Byron Pringle and Demarcus Robinson left during free agency. The absence of these three receivers will force Mahomes to rely on some combination of JuJu Smith-Schuster, Marquez Valdes-Scantling and Skyy Moore to help replace his production.

All told, the Chiefs are going to look different in 2022. They don’t have Hill or Tyrann Mathieu anymore, but they have added plenty of young talent to the fold. The only question is whether it will be enough to help them keep pace in the AFC West, which looks like one of the best divisions in the NFL this season.

Here is a complete breakdown of the Chiefs’ 2022 schedule, including dates, start times and analysis for all 17 games.

The Chiefs’ schedule will be announced as part of the NFL’s schedule release on Thursday, May 12. Below is a look at their 17 opponents for 2022 and what has been leaked of their schedule to date.

The Chiefs will want to start the 2022 NFL season quicker than they began the 2021 campaign. They limped to a 3-4 start out of the gate which led many to question whether they would be a legitimate Super Bowl contender. Eventually, Kansas City went on an eight-game winning streak and made it all the way to the AFC Championship Game, but the ride was far from a smooth one.

It figures to be bumpy again in 2022. The Chiefs have to play every team in the AFC West, which is arguably the best division in football, twice. They also get to face the teams from the NFC West, which will be tough, while the four AFC South matchups should prove easier for Kansas City.

The Chiefs have one of the toughest schedules of 2022 when looking at their opponents’ results from last season. Kansas City’s opponents posted a combined record of 154-135 in 2021. That .533 win percentage ties them for the fifth-hardest schedule of 2022 with the 49ers.

That’s not guaranteed to stay that difficult. After all, these teams have undergone a lot of changes. However, the Chiefs still figure to have a tough schedule, as they are facing a gauntlet of quarterbacks that includes Josh Allen, Russell Wilson, Justin Herbert, Derek Carr, Matthew Stafford, Kyler Murray, Joe Burrow and Tom Brady, among others.

Patrick Mahomes will be able to outduel some of those passers, but will he be able to get at least 12 wins for a fifth consecutive season? That’s a question worth asking.

Toughest Tests: The Chiefs have six tough games built into their schedule, as each AFC West team, home and away, could give them trouble. Each team has a strong quarterback and well-built offense full of weapons, so Mahomes could find himself in shootouts often in 2022.

In addition to the divisional clashes, the Chiefs have to travel to Tampa Bay and Cincinnati. Tampa can be a difficult place to play because of the heat while the Bengals are the reigning AFC champions. Kansas City will be out for revenge in both contests, as Cincinnati ended its Super Bowl run last year while Tampa Bay did so the year before.

The Chiefs’ home schedule is a bit more favorable considering the advantage that exists at Arrowhead Stadium. Their matchup with the Bills should still prove difficult, as Buffalo will want revenge after losing to Kansas City in overtime during the 2022 postseason.

Biggest Breaks: Getting to play the Jaguars and Seahawks at home should provide the Chiefs with two easy wins. Getting the Titans in that spot is also helpful, as Kansas City should have the firepower needed to keep pace with all of the AFC South teams at Arrowhead Stadium.

The road games are a bit more difficult for the Chiefs, but traveling to Houston shouldn’t be too hard. All the Chiefs need to do is limit Davis Mills and Co. in that contest. That shouldn’t be too challenging, so it looks like there are four or so easier wins on the Chiefs’ schedule.

Bottom Line: The Chiefs have never won fewer than 12 games with Mahomes as their primary starter, but this may be the year to bet on them failing to reach that number.

Sure, the Chiefs have one of the best quarterbacks in the NFL. They also have a good offensive line, a stronger-looking defense and enough weapons to get by with on offense.

But how much will the absence of Tyreek Hill hurt, and will it cause growing pains for Mahomes? Those are questions worth asking. Kansas City’s offense won’t be as strong without Hill and with their three divisional opponents getting better, earning double-digit wins will be a grind.

You should still expect the Chiefs to do that and have a shot at the AFC West title. Just don’t be surprised if they endure another rocky start to the season as the offense learns to operate without Hill.